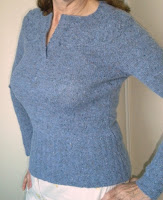 In a word, my mom is amazing.  I've dealt with chronic illness for 19 years and she's supported me the whole way.  While friends and community have fallen away, she's remained despite the pain she feels seeing me in pain.  My entire life she's been loving and supportive.  She's my best friend.

I mentioned hoping to go to a party last weekend and she said she'd drive me.  That would involve over an hour of driving just to pick me up and drop me off, plus her evening gone, but she's happy if it means I can see friends and enjoy myself.  I do the best I can to take care of myself, and I work really hard at it, but for the many many times I fall short it's so good to know my mom has my back.

That's why I was thrilled to discover that the Tangled Yoke sweater fits her perfectly!  She was so excited to have a new sweater, it's essentially made to measure for her, and the project was an unmitigated success :)

I took some in-progress photos while creating the front placket, so stay tuned for that mini tutorial plus better photos of the cable.

Links to this post
Labels: family, knitting, Tangled Yoke, thanks

I had an email asking about my serger, and in the process of trying to explain how I find tension settings I thought "this would make a great blog post".   I use a scientific-ish method, typically changing one setting at a time.  The test results are written down on scratch paper, then the final settings are noted along with the fabric type, number of layers, and other information.

Recently I serged cotton jersey, 2 layers, with a 3 thread stitch and 2mm stitch length.  I usually make note of the stitch width as well.

My notes looked like this, x representing the unused needle:


Next time I need to serge cotton jersey I'll save a great deal of time testing settings.  Some tweaking is usually required, especially when changing stitch length or width, and that is also noted.  I keep very close watch on these notes as you can imagine!  Cotton jersey may work close to 4-4-4-4 base settings but muslin and poly satin have quite different characteristics.  That's not even getting into rolled hems!

I've always been confused about hip measurements and sewing.  The directions are to measure around the widest part, which is my butt.  I know that's an important measure to have, but where exactly are my hips?  And what do they measure?  The hip is above the crotch, but where exactly?  And I'll still need to add width below the hip in order for my rear end to fit.  So confusing!

Recently I finally found an answer in black and white.  It was something like, High hip is 7" below waist, Full Hip 9" below waist.  This is what I'd been doing--finding the pattern's hip, measuring it, comparing the two--but now I had proof that I was right. lol
Posted by Summer at 10:28 PM 0 comments

After letting the Tangled Yoke sweater relax overnight, and myself too, the fit had improved!  I've given up trying to understand the whims of The Harsh Mistresses Gauge and Wool and just go with it.  There's the usual yoke sweater excess at the underarm but not a big bubble like the first night.  The fit is generally great, and I'll be able to steam out the few remaining bubbles under the cable.

I've been really sick so have no photos.  Tomorrow I'm hoping to sew the steek* and insert the placket.  I'll try to take photos of the process.  I started trying to sew tonight with grey thread on blue tweed wool and it just wasn't working.

*Steek: A slit cut in a column of knitting to insert a sleeve or to create a cardigan opening.  Lines of machine stitching can be sewn on either side of the slit to prevent raveling.  I'm inserting a henley placket via this method.
Posted by Summer at 10:55 PM 0 comments

I was 98% finished with the Tangled Yoke sweater, tried it on (again) and realized that it's a total failure a mess up top.  The cable turned out ok but the fit of the yoke is poor and not something I can fix without major surgery.  There's a bubble of extra fabric above each underarm, more than is typical for a yoke sweater.  Adding a few decreases, a la raglan sweaters, would probably eliminate that.

I'm very upset that a designer's bad choice messed up something I've been working on since June.  I took many measurements of myself and my favorite sweaters, compared them against the stitch counts and schematic, and thought I had a winner.

I'll try to post photos tomorrow of the problem spots.  Even the magazine photos show the excess fabric at underarm:

The gathering under the cables:

The Cable is Vanquished!

I win I win I win I win :D  Sure it took me two tries, but that's the beauty of yarn.  You make a knitting mistake and it's completely reparable.  Now I just need to finish the bit above the shoulders, and the finishing-up, and the sweater she is done.  More of the Tangled Yoke saga.


I apologize for the terrible photo, it's dark.  And one of the cats tried to stand in the light.

I thought I'd share a super quick and easy "dinner".  It's also a side dish if you have higher aspirations than me.

Pop the lentils and onion wedges into a small pot and just cover with water (approx 3 cups).  Bring to a simmer and add the salt and cayenne.  Cover and cook, still simmering, for 20 minutes until the lentils are cooked through but still firm.  Serve hot or cold, seasoning to taste with more salt.  We add some salt during cooking so the lentils aren't bland, but too much salt (i.e., enough) and legumes won't soften.  One of those fun food chemistry facts :)
Posted by Summer at 11:20 PM 0 comments