In the course of events I researched WWII British double agents this evening.  I've always been interested in spying, though I'd be a terrible spy myself.  The term double cross comes from that period, named after the office that oversaw double agents--the Twenty Committee, or XX.

MI5, while fairly inept early in the war, were rockstars later.  Every single German agent in England was turned and used for misinformation.  The Double Cross network helped in disinformation campaigns vital to winning the war.  They also kept London from being obliterated by V1 and V2 rockets, agents falsely reporting hits in the city center which the Nazis believed over the telemetry readings!  The rockets were retargeted off course by miles.

The most impressive story, to me, is 'Garbo.'  Juan Pujol, a Catalan man, wanted to help in the fight against fascism.  While living in Lisbon he pretended to be spying from England.  Pujol used reference books to create false reports for the Nazis (the Brtits wouldn't have him at first).  In 1942 he was recruited as a double agent and moved to England.  There he worked with an MI5 agent to report a combination of false and useless, or late, real intel.

Pujol, first in Lisbon and later with his MI5 agent, created 27 false sub-agents, the Nazis paying him for all of them.  These two men accomplished more than any other agent.  Pujol was awarded both an Iron Cross and an MBE.

What I find hilarious is that, despite his intelligence and resourcefulness, in Portugal Pujol couldn't figure out the British pre-decimal currency system!  He would submit expense reports untotalled, not knowing how.  I remember reading Ballet Shoes when young and being utterly baffled by the currency.  Only with the advent of the web and wikipedia was I able to find an explanation of the system.
Posted by Summer at 1:14 AM 0 comments

I've been working on a woven top for a while and today (well, yesterday now) completely changed the plan.  I decided I don't like the lace trim for it.  I think I'll use bias strips for the neckline, from the same muslin.  This top has been a lot of work to fit since it's my first raglan project.  The lace will be used for a sleeveless top, or as a waistband, something.

I realized that I rarely wear woven tops lately because most of my trips out are to PT.  And for PT I now need a top that can be pulled over my biceps.  None of my woven tops do this.  It's strange to realize how much this one thing impacts how I dress.  I also have a long torso and RTW wovens rarely fit well, whereas knits aren't a problem.
Posted by Summer at 12:31 AM 0 comments

I tried quilting the oval-y borders but it didn't work.  I'd forgotten how hard it is to sew curves with a machine.  The stitches and tension were unveven, the curves awful; it looked too much like the version I'd drawn on my camera.

Then I pulled out a piece of muslin and some scrap batting and tried free motion quilting.  This worked a little less well than usual because I hadn't changed to the fancy darning foot.  I'm giving up on oval borders and will be making triangles for the outer border, maybe a straight line bisecting the narrow white inner border.  Or try out some decorative machine stitches.

My time is filled up with medical appointments lately, very unfun.  The pain clinic doc doesn't know what's going on with me or what to do about it.  So I'm doing the rounds (again) and maybe somebody will think of something.  I've tried researching in medical journals but don't have access, and am too ill to go to the nearby med school library.  Many days I feel like Sisyphus.
Posted by Summer at 5:25 PM 2 comments

I finished outlining the stars last week!  Now to decide on border quilting designs.  For previous quilts I'd drawn a scale version in color to decide on block placement and borders.  Sketching quilting lines onto the drawing was easy.  This time I don't have a drawing so I used technology: 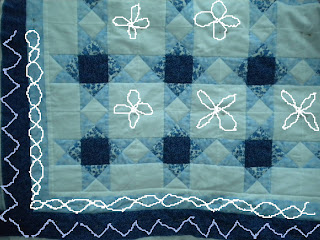 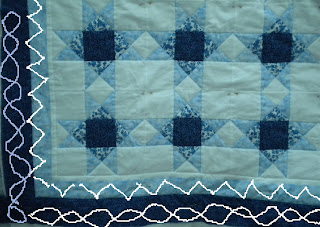 Option 2
Drawn with a stylus on the camera's screen, not very impressive I know.  But better than nothing! 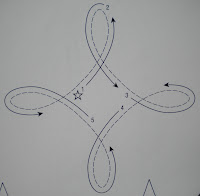 For the white areas between the stars, a free motion quilted loopty-loop thing (crudely drawn in Option 1).  Assuming I can get my free motion quilting up to scratch.  I could quilt it by hand but I have even less practice at that.  My other idea is an organic spiral design, also free motion.  I have plenty of scraps so better start practicing...

Previous quilt posts can be found here.
Posted by Summer at 7:22 PM 0 comments

The online sewing blogging community is trés international but this can lead to some confusion.  I was thinking about some of the differences between British and US English clothing terms today.

For example, polo shirt or golf shirt?  Turtleneck or polo neck?  Just who is playing all this polo?
And then you have vest, which can mean a sleeveless sweater, or sleeveless undershirt, and likely other things that aren't coming to mind.
Jumper is another confusing one and I'm not sure how it came to mean sweater and sleeveless dress.  Lack of sleeves seems to be a consistent theme however ;)

Do you have any interesting or amusing examples?  I'd love to hear them.
Posted by Summer at 12:00 AM 0 comments

I got a positive robocall yesterday!  An automated reminder for my Pain Clinic appointment next week, and I now know which doctor I'm seeing...an anesthesiologist specializing in pain management!  Whom prior research had likely shown to be the only doc north of LA and west of Arkansas to know anything about what's going on with me.  I'm a very speshul snowflayke :p

I'd been trying not to raise my expectations about this appointment.  I didn't know whether I'd see a gatekeeper-type first and do the rounds, including the inevitable psych appt, before they'd start treating me. Since getting an appointment took from May until Aug, more delays are not happy-making.  I still am trying not to expect actual help from the first visit.  But knowing who I'm seeing, I can make notes in case that's a total brain fail day.
Posted by Summer at 4:35 PM 1 comments

The Book of Awesome

Or, How I Diagnosed Myself with Chickenpox.

Growing up we had a first aid book aimed at outdoorsy people.  It included directions and illustrations for how to set and dress a compound fracture, impaled eyeballs, all kinds of cool things!  I have always loved all things medical so spent many happy hours perusing this book.

When I was 14yo I got chickenpox.  The one thing you didn't do was wake my mom without sufficient reason.  Only recently did I remember that between waking sick with a nasty, itchy rash and telling my mom that I had chickenpox, I checked The Book and diagnosed myself.  Hahaha.  She felt a little guilty, actually, when I told her that.  But I thought it was pretty cool that I could figure it out by myself (yep, I was that kid).

It was later donated and I thought I'd never be able to find a copy: I couldn't even remember the title.  But after a few searches on Amazon I found it!  Best of all, the edition from my childhood is 1¢ :)  Guess whose Christmas came early? lol
Posted by Summer at 3:44 PM 4 comments

Some advice: best not to tell your doctor "that makes me crazy."   For me it's equivalent to it drives me crazy.  For my doctor, not so much.  He looked into my eyes appraisingly and was concerned.  Oops.  At least I can put it in my blog! lol

On a sewing-related note: am I the only person who avoids graphic-heavy sites?  I can't read Sew Weekly without it bogging down my computer, and the STC site did the same.  It's typically Flash photos or animation in the sides, distractions to me, which I'd rather disable.
Posted by Summer at 10:30 PM 2 comments

A few people have questioned me or pushed me to date, as though saying "I can't date" means I've given up on potential relationships.  That's not it at all.  I wish I were well enough to do things I enjoy, a relationship among them.  I explained it quite well in my last post I think.  I appreciate the lovely comments--your support means so much :)
I realize that I look healthy, and all but the few closest friends see me only at my best.  But I wish people would respect what I say.  I'm not overreacting to the breakup--it was seven months ago.  This is a realistic appraisal of my life based on my reality.
Posted by Summer at 2:39 AM 0 comments