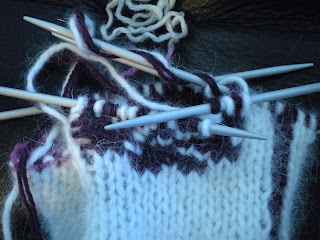 The first mitten is coming along well, except the contrast pattern looked awful.  I chose a new pattern and am reknitting just the pattern stitches instead of undoing everything.

I didn't take pictures of the first pattern, it was too dark last night.  I reknit most of the new pattern before bed and have only two rows left today!  This may seem like a ridiculous amount of effort, but it's really less work in the end.  Ripping out patterned double knit is quite tedious.


The star points were too stubby to show up well.  The new pattern is theoretically four hearts but I choose to see it as a vaguely flower-shaped design ;)


The new pattern looks quite nice.  It takes some fiddling to even out the tension on each row, but not too bad.