Happy New Year everyone!  May we all have a better, brighter 2012 with more fun, stronger friendships, fewer difficulties and balanced budgets. 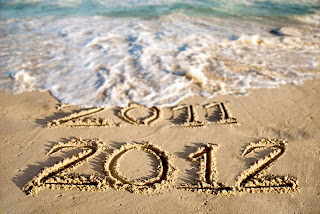 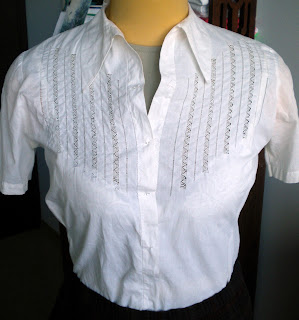 I bought this homemade blouse off etsy, the seller stating that it was from the 30s.  The bodice front and sleeves have hand drawn thread work.  The sleeve hems and front button bands are machine hemstitched, which adds a nice touch.  It's a beautiful piece and very wearable.

The top drawn threads had broken in places so I mended those as invisibly as I could.  Gusset strips had been added between the side seams to enlarge the blouse, at a later date as the seam length and thread were different and the quality of sewing was poorer.  I removed those and now it fits great!

After taking the first few photos I sewed on vintage mother of pearl buttons, and a snap below the last button.  Whomever originally wore this blouse had a pretty short torso.  I'm tall so I also sewed an extension strip to the bottom, from leftover cotton gauze, to keep the blouse tucked in.

I finally have photos to share of the plaid skirt I altered.  The days are so short with few sunny days that it's hard to get good photos.

This skirt was almost exactly one pleat's-worth too wide.  To alter I basted where the new side seam would be.  Then folded out the pleat and pinned the new side seam to check fit.  It was pretty good so I unpicked the side seam and right side of zipper, and sections of the waistband and hem.  Double checked the fit, and cut off the extra fabric.

I used pinking shears to remove the excess fabric.  The original seams had been pinked and are holding up well.  The hem is covered with seam binding and was machine blind hemmed.  I sewed the seam binding back on, removing a damaged section.  Then steamed the hem to an even curve and whip stitched the hem back down. 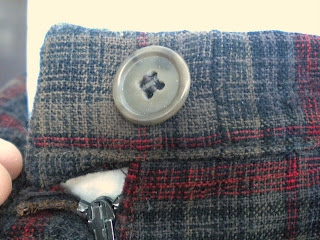 Someone had done alterations on this skirt already.  The waistband had a length extension.  The zipper had a couple lines of stitching and some unpicked, but not completely removed, thread.  I'm not sure whether someone tried to alter this to be wider, or narrower, or ?   I didn't see any evidence of alterations in the side seams or pleats.  Maybe she just added width to the waist as girdles fell out of favor.  The etsy seller I bought this from had a matching jacket, maybe it provided the extra waistband fabric.
I removed most of the waistband extension before edgestitching the waistband back onto the skirt.  The raw edges of the underlap were turned in and whipped together to minimize bulk.  It looks funny but works great.  The button overlap now covers the waistband extension.
Most of the shaping in this skirt is from angled pleats. They're narrower at the top, taper out to the hip, where the pleat topstitching ends, then are free to the hem.  It's a lovely skirt, lightly worn with no holes, and a nice just-below-knee length.  It requires control top pantyhose or a girdle since the waistband sits around my natural waist and the pleats add bulk, accentuating any tummy.  I don't mind wearing vintage undergarments with my vintage clothes, though.  At least not in winter ;)

I'm sick; a sore throat Saturday evening turned into a sinus infection by Sunday night.  So I'm lying low, drinking lots of water and taking antibiotics.  My eyes are bloodshot from the pressure.  You'd think that my body's incredible autoimmunity would translate to actual immunity, but no.

Last Saturday I did finish altering a vintage Pendleton skirt.  I love the plaid even though it was a size too big.  Removing exactly one pleat made it fit well, and it was ready to wear to celebrate my mom's birthday!  We had a great time doing Christmasy things and eating dessert :)

I have some Christmas knitting going on, too.  I'll post photos of the skirt when I'm feeling better.  I should really make up a couple garments.  Getting started can be hard, especially when sick.
Posted by Summer at 3:09 PM 0 comments