I knit this Good Day Sunshine shawl in May, as a while-my-sprained-finger-heals project.  I made a couple changes: removed the first 2 reps (24 rows) to make a crescent shaped shawl and kept the lower density of 3into3 sts through the entire Sun chart.

I finally have some good photos to share :)  I've also worn it a couple times and it's great!  Beautiful as well as warm and soft against my neck.  I used white JaggerSpun Zephyr, one of my favorite lace yarns.  Initially I planned to dye the finished shawl but I really like it white. 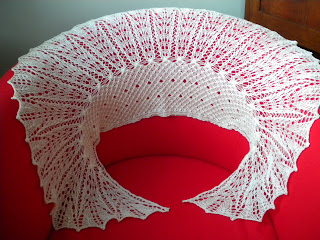 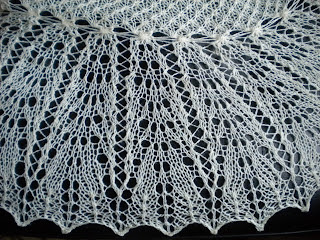 I sew when I have more energy, knit when I have less, and I've been knitting a great deal.  I want to sew, I have ideas and fabric for lovely summer tops and dresses, but all the thousand little steps are too much.  I did finish a top, and my machine is still out…but I just don't have it in me to sew.

Instead of thinking about all the things I can't do and really really want to do, I knit.  Even when I have migraines all day for 2 weeks in a row and wish I could sleep through life, I still knit.  When anything I read falls out of my ears, or I'm home alone and lonely, and especially when I hurt too much to think or talk or concentrate on a movie, I knit.

I'm currently mulling knitted lace ideas, so watch this space for designs.  Today I discovered the solution to one idea and will be charting and swatching away.  Plus I started a sweater!
Posted by Summer at 7:26 PM 0 comments


A big problem when knitting stripes or colorwork is the dreaded jog.  Knitting circularly creates spirals that stack on top of each other.  The pattern staggers where each new spiral begins:
The pattern I used for the Peerie Flooers hat had the jog smack in the middle of every other flower.  I neglected to take photos of my hat before fixing it, so here's another knitter's example:

(L) the main design
(R) the jog, destroying the continuity of the design and making knitters everywhere sad.

I didn't want to live with wonky flowers so ripped out 3 of the 4 flowers and reknit them.  I used two techniques in conjunction to eliminate the jog.

When it came to the crown section I changed strategies.  I slipped the first st of the round, then knit it per the previous round's chart the next time it came across my needle.

My other strategy: often in the chart the first stitch of the round is the same color for two or more rounds.  When this was the case I knit the first st of that color in the first round and slipped it on the second round.  When the chart called for knitting 4 sts of the same color in a column I knit it the first round, slipped it the second, knit it the third, slipped it the fourth.  The slipped stitches did elongate but I was able to tighten and even them out manually, and they really blend in after blocking.

In the photo above the crown motif at center has the start of the round running through it.  I can hardly tell and i know where it is!  The line stops in the middle of the motif for better visibility.

The Peerie Flooers hat is done, to match the mittens I finished a couple weeks ago.  It's amazing how much faster the knitting went on a circular needle, and having memorized the pattern.  I also added a soft merino hem lining, as in the mittens, since my forehead is sensitive to itchy wool. 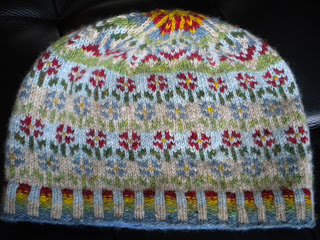 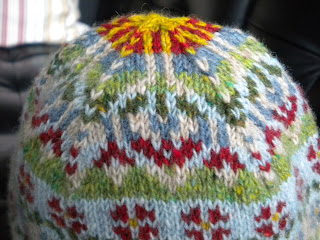 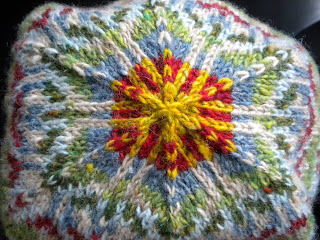 I made a tiny alteration to the last two rounds of the crown: instead of k2tog around I worked *k1, sl2 k1 psso* leaving 6 sts.  This continued the lines of the centered double decreases.  I'm quite pleased with myself, even though very few people will be tall enough to notice, lol.

In a future post I'll explain how I solved--in this case at least--the problem of the end of round jog.
Posted by Summer at 9:44 PM 0 comments

I finished the Peerie Flooers mittens and finally took some photos of them.  There were lots of ends to weave in!  I'm now working on the matching hat.

The thumbs are quite fancy.  There's a neat blue floral design under the red flower.

I redesigned the top of the mittens: the pattern as written would have been 1" too long.  This is the result:
(it looks better in person)

I was able to squeeze out both mittens and the hat with one ball of light blue, but needed two balls of natural.

In real life, I've had a couple weeks of daily migraines.  Most days it's an all-day thing so I've gotten very little done.
Posted by Summer at 11:28 PM 0 comments