The quilting is coming along pretty well, though of course slower than I'd hoped.  I've sewn vertical and horizontal lines along the sides of the stars, now am finishing outlining them.

Some photos of the in-progress quilting:


The design to quilt around the stars in straight, unbroken lines (begins at #1, bottom left).  This outlines the stars completely with two passes per row.  Pretty clever if I say so myself ;)


The planned motif to decorate the white squares between the stars: 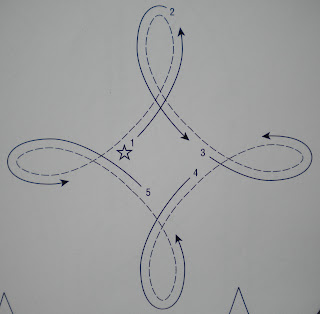 All scans from "Heirloom Machine Quilting" by Harriet Hargrave


Ideas for the borders:

I think I'll use one of these on the larger dark blue border.  I'm thinking diagonal lines on the smaller light blue border to echo the edges of the stars.